“This morning, Unifor members are out in force on CUPE picket lines, but we need to pool our support as CUPE members and the union face threats of excessive fines for taking job action,” said Lana Payne, Unifor National President. “The provincial government attacked all workers with its targeting of CUPE members, so all workers must respond.”

The national union and the ORC will each donate $50,000, for a total of $100,000 to CUPE’s strike support for paying fines imposed because of the strikebreaking Bill 28, the law passed on November 3, 2022, that strips education workers of their Charter-protected right to strike and which imposed an undemocratic contract.

“The situation we find ourselves in this morning is far from normal. 55,000 workers are bravely walking picket lines to not only fight for better wages and better schools, but now to defend the rights of all workers to strike,” said Naureen Rizvi, Unifor Ontario Regional Director. “Today we’re picketing with CUPE, but Unifor will continue to escalate our actions until Bill 28 is repealed and a fair collective agreement is negotiated for CUPE.”

Rizvi and Payne joined CUPE OSBCU’s picket lines at Queen’s Park on Friday morning as Unifor members in every corner of the province showed up to support striking CUPE education workers.

CUPE Ontario’s picket locator and other resources are available on the Unifor website.

CUPE Ontario education workers earn an average of $39,000, 84% earn less than $50,000 per year, more than half are required to work at least one additional job to make ends meet. Education workers wages were cut by more than 11% (in real terms) from 2012 to 2021 through legislated wage freezes and restrictions on wage increases.

Unifor is Canada’s largest union in the private sector, representing 315,000 workers in every major area of the economy, including 800 workers in Ontario’s public and catholic school boards. The union advocates for all working people and their rights, fights for equality and social justice in Canada and abroad, and strives to create progressive change for a better future. 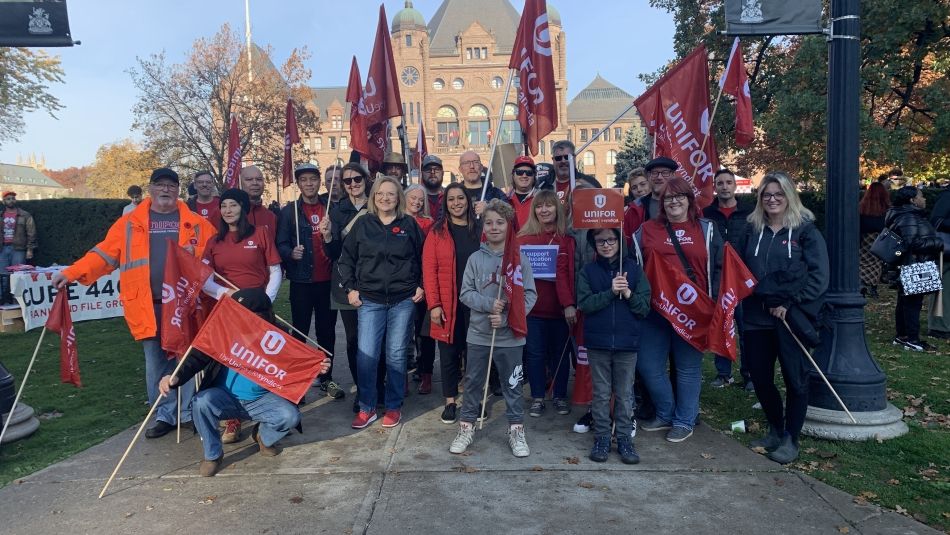