Saba Eitizaz fled from Pakistan to Canada after “violence online trickled into my real life” for reporting on human rights issues.

The Toronto Star producer and podcaster came to this country for safety, but hasn’t been able to leave behind the harassment and vitriol.

“Now, the place of refuge is now looking like the place of escape,” Eitizaz said. “I really don’t know where to go next.”

Eitizaz, along with Toronto Star social and video editor Angelyn Francis and CBC reporter Omayra Issa and moderator Shree Paradkar, a columnist at the Toronto Star spoke at length about the abuse journalists face on the job during a panel about harassment of media workers at the Ontario Regional Council in Toronto on Dec. 2, 2022.

In most cases, the harassment goes beyond the content of the story. It often gets personal, with attacks on the media worker’s skin colour, identity, gender and faith, doxxing and being followed home.

Francis said she’s detached herself mentally from the harassment to the point where it’s almost robotic to ignore the hate.

“It’s something we live with. It’s constant,” she said.

Unifor conducted a survey in late 2021 to early 2022 to document experiences of harassment journalists faced. Women, journalists of colour and LGBTQ2S people were disproportionately targeted for harassment, that media workers wanted a point person to go to address harassment and clarity through collective agreements on how to report harassment.

Unifor continues to developing supports for media workers, such as the helpishere website.

Issa, a Black woman working in a Saskatchewan newsroom, said she received a “huge wave” of hate mail and death threats after doing a story addressing the erasure of Black history in the Prairies.

“I’ve had racist and sexist language directed at me and it has fostered an unhealthy and unsafe work environment,” she said. “When you don’t know where these things are originating from, but you’re receiving them in your inbox, it’s very jarring.”

Eitizaz took a breath and searched through her phone for an example of the hateful and racist emails she frequently gets. She warned delegates that what she was about to read – racist threats of her being violently killed by “a stadium” of white Canadian men using automatic weapons – was triggering.

“Every time we talk about what we’re facing, we’re told that journalists are supposed to be criticized for their work and have thick skin,” she said. “We had to convince people that this was not an isolated incident. I feel like that burden shouldn’t have been on us.”

Ex-U.S. President Donald Trump may have coined the terms, “Fake news,” a catalyst in the bubbling animosity towards media workers, but the turning point for Canadian journalists was when People’s Party of Canada leader Maxime Bernier urged his supporters to “play dirty” with journalists in Oct. 2021.

And journalists, as public figures, are instructed by their employers to share their email addresses or social media handles at the end of stories to have dialogue with the public because the scope of their work involves informing the public.

Francis said not having effective filters for people who respond “makes you feel like you’re standing in the middle of a tornado without any kind of options or shelter.” 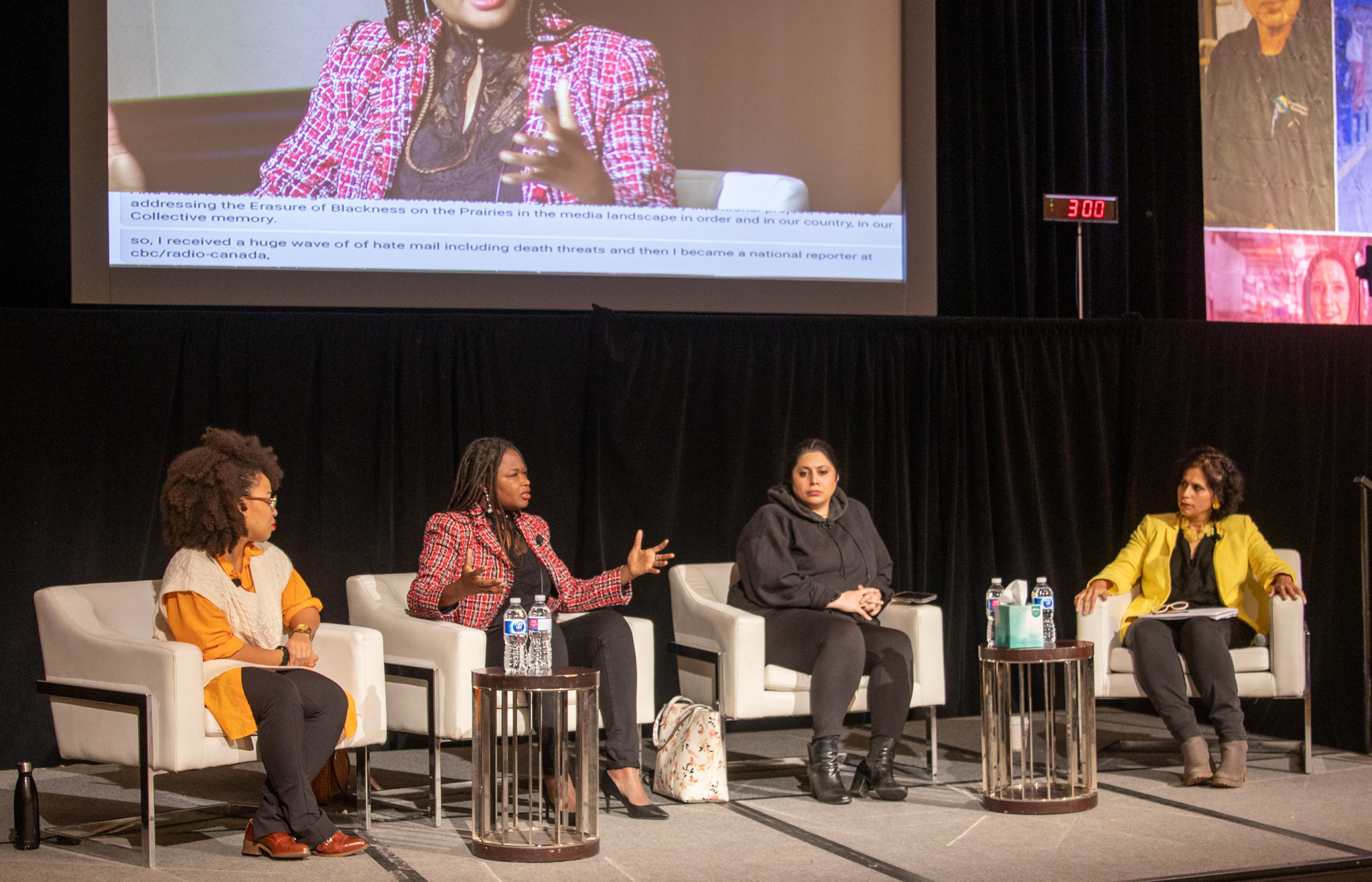 Paradkar suggested employers could give support to media workers with more days off if they need them.

“I feel like Canada needs voices like mine, that’s why Canada invites people like me to offer our perspectives,” said Eitizaz. “It’s trauma-response management. I want my manager and newsroom to support me while I do my stories. Don’t take me away from them.”

Issa said journalism and journalists are one the “frontiers” of democracy and there needs to be more awareness for the Canadian about to the harassment media workers face.

“If we get attacked and bullied and forced into silenced, there’s so much at stake for all of us,” she said. “This is a significant moment in history in our country. The decisions we choose to make in terms of whom we choose to protect will say a lot about how healthy we want our society to be.”

In her keynote speech on the first day of Ontario Regional Council, Toronto Star columnist Shree Paradkar said the impact of billionaire Elon Musk’s ownership of Twitter will have a direct impact on workers at large.

Musk closed the purchase of the social media company for $44 billion in October, swiftly restoring Donald Trump’s ability to tweet and making sweeping layoffs of thousands, or more than half, Twitter workers, including those responsible for vetting content.

“If Twitter was in the Marvel universe, Trump would have been Magneto and Musk is Thanos,” explains Paradkar.

“Can you imagine having so much money, $44 billion and treat it so carelessly? Musk is supposedly a free speech absolutist, but the first thing he brought back was far right voices and left-wing activists found their accounts shut down. The (moderation) staff for child abuse in Twitter down to one staff. What’s happening at Twitter is very much a labour issue.”

So much of that organizing to the CUPE general strike happened on Twitter, she added.

“If that goes, organizing goes. I’m talking about a set back,” said Paradkar.

Paradkar said Twitter gave a platform to voices that media traditionally shut out, which is empowering. However, any time there are raised marginalized voices, there is a backlash.

“And so, began the abuse of journalists whose very presence was unwelcome in any system of power,” she said. “I’m talking about women, white women, women of colour, Indigenous women, Trans women – mostly misogynist, racist abuse.”

After Trump came in 2016 – he brought in the expression, “Fake News” because it “served him well to have that distrust in the media. A lot of journalists began to see those accusations of fake news in our inboxes…in the backlash we got.”

Paradkar’s call to action to the ORC delegates was to email the editor-in-chief and ask them “to take care of the journalist who will be facing backlash today.”

“You see, when journalists are abused,” she said. “It threatens all of us.”